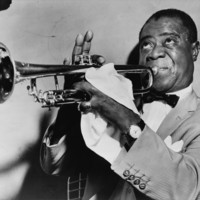 Pops, did you hear the story of Long John Dean?
Not yet drummer
A bold bank robber from Bowlin' Green
Was sent to the jail house yesterday
But late last night he made his getaway

[Chorus]
He was long gone from Kentucky
Long gone, ain't he lucky?
Long gone, what I mean
A long gone John from Bowlin' Green

Well, they offered a reward to bring him back
Even put bloodhounds on his track
Those doggone bloodhounds lost his scent
Now nobody knows where John went